Members of the Labour Party in Clwyd South regularly raise community concerns with our local Labour MP & AM. Here are two examples of issues that Llangollen members have raised with Susan Elan Jones MP and Ken Skates AM. Members have been concerned with the provision of bus services and the inadequate provision of Careers Support for young people in the area. 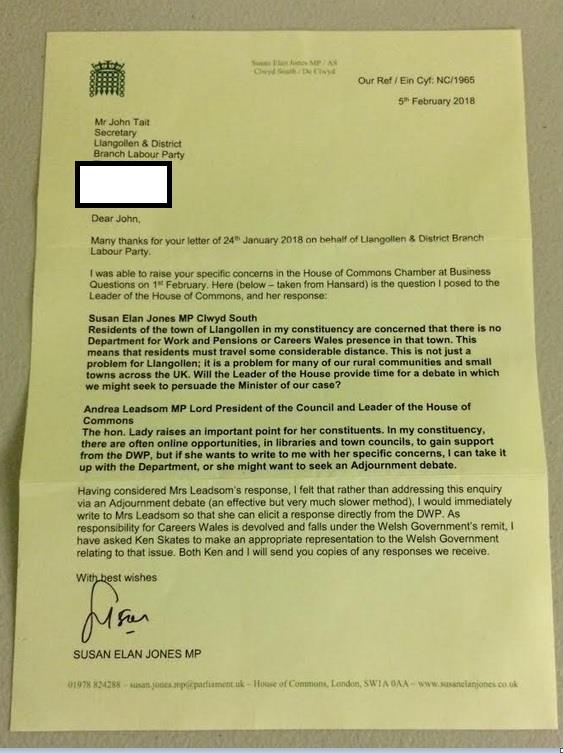 Dear John,
Many thanks for writing to me concerning the sustainability of local bus services, specifically those serving passengers travelling between Llangollen and Wrexham.
I am afraid deregulation of the bus industry in the mid 1980s has been nothing but a disaster for passengers. Profit was prioritised over passenger interests, commercial routes have led to companies competing to the lowest prices (thereby leading to the collapse of services) and non commercial routes have been left to councils to support.
Sadly, in spite of Welsh Government sustaining subsidy levels at £25m per year to support non commercial local bus services, some councils have chosen to reduce significantly what they spend on supporting non commercial routes. In the case of Wrexham Council the subsidy has been cut to zero (£0). Last year Welsh Government injected an additional £300,000 into North East Wales to help address the strain councils were under after the collapse of a major bus company. That funding was conditional on councils matching 50% of the costs and on them producing an up to date regional bus strategy. I am awaiting this and I am also pressing some councils to show a greater degree of commitment to non commercial services, which they have responsibility for supporting.
In my Ministerial capacity I am about to acquire additional powers under the Wales Act that will enable us to address many of the failures of deregulation. Consequently, I intend consulting on detailed legislative proposals later in the spring of this year. I have already consulted on improvements to youth and over-60s free and concessionary travel, as well as on overarching reform of the industry. My intention is to drive up the quality, frequency and availability of bus services through legislation and via the £250m-plus funding that the public sector pumps into bus services annually. I have been clear that reform must be revolutionary for the passengers, putting their interests ahead of profit.
The North East Wales Metro is under development, with the initial focus on strategy interchanges and upgrades. I have committed £10m to Wrexham for this purpose and through the new Wales and Borders Franchise (operational from October this year) I expect station upgrades, greater integrated ticketing and timetables and more frequent services.
I appreciate what I have outlined above will not address immediate shortcomings (with the exception of the emergency assistance I am able to offer councils on the basis of them matching Welsh Government support) however, in the medium to long term I believe the new franchise, development of the Metro and radical reform of bus services will lead to a significant step-change.
Best wishes,
Ken