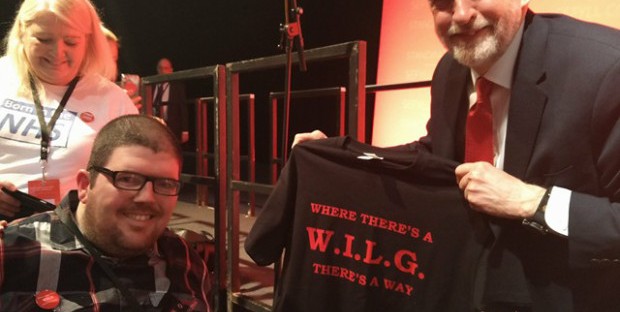 Clwyd South CLP are today disappointed with the decision of Huw Irranca Davies and the Welsh Labour Government to push ahead with plans to scrap the Welsh Independent Living Grant.

For some time Clwyd South and Wrexham CLPs have campaigned alongside our comrade and friend, Nathan Lee Davies, to Save the Welsh Independent Living Grant. This grant is essential in ensuring that the most severly disabled of our society get the support they need to have a life, and not just merely exist. The importance of this grant has not been missed throughout our Party and Movement, gaining the support of CLPs throughout Wales and also affiliated Unions. This support was carried into the Welsh Labour conference last month where the Welsh Labour Party voted almost unanimously to retain the grant. Labour Party Leader, Jeremy Corbyn, was also present and keen to express his admiration for the superb work that Nathan has done with his campaign .

It is because of this we are today shocked and furious that not only has a Labour Government been so willing to turn its back on the most vulnerable in our society, but that it has turned its back on the clear instruction it recieved from conference. This was announced last night on BBC 1 Wales programme Wales Live, and Huw Irranca Davies was far more concerned about talking up a run for Welsh Labour Leader. Today, we’re calling on our Labour Government to think twice about this decision, to remember its roots and to do the right thing and SAVE THE WELSH INDEPENDENT LIVING GRANT.

Clwyd South CLP chair Vic Grout said “I’m deeply unhappy and disappointed that Clwyd South’s motion to ‘Save the Welsh Independent Living Grant’ – passed overwhelmingly by Welsh Labour Conference – appears to be being ignored by the minister, Huw Irranca-Davies. Obviously I can’t short-circuit the democratic process the CLP will follow in endorsing candidates for the Welsh Leadership election but I think it’s highly unlikely that our members would choose to support anyone with such demonstrable inability to grasp simple facts or listen to arguments. Welsh Labour needs intelligent, principled leadership, not glib, shamelessly career-focused opportunism.”

The whole of the Labour Family from staff members, AMs to MPs, councillors to affiliates and unions such as UNITE are on the same page. The only one who isnt appears to be the minister making the decisions.

1 thought on “Clwyd South CLP statement regarding the SWILG campaign”